Anatomy of a trade

ANATOMY OF A TRADE

In a Letter to Shareholders published at the beginning of April 2020, which was in the middle of the great market slump, we wrote about buying four new stocks. One of them was described as follows:

“…the fourth is a special opportunity where we expect a shorter holding period. We have been pointing out for some time already that the fact most money is managed by passive or covertly passive funds will mean that as soon as investors start to withdraw money from these funds, the funds will have difficulties to find enough buyers. This is exactly what happened in March. Especially ETFs had big problems with this. That is because their promised liquidity is often much lower than is the liquidity of the assets they hold. They had no choice other than to sell out their positions at nearly any price. This created attractive opportunities, and we took advantage of one of these. It provides a beautiful example of how easily wealth can shift from passive to active investors. If the proportion of passively invested money will continue to grow, these opportunities will appear with ever increasing frequency.”

We did not mention which stock it was at that time, because the attractive opportunity to purchase was still there and we did not want to reveal our know-how, which our investors pay to benefit from and not to be broadcast to the whole world. Now we can already say that it was a series B of TGP preferred shares. These are cumulative preferred shares with nominal value of USD 25 and dividend of USD 2.125, which means a dividend yield of 8.5% when the price is USD 25.

A well-known rule says that some of the best investments originate in transactions where on one side there is somebody who buys or sells under pressure, against his or her will, and regardless of price and liquidity. This is not just some academic fairy tale. Such opportunities really do arise and our purchases of TGP-B shares fall into that category.

Under normal circumstances, TGP-B shares are traded at the level of their nominal value or even above. Dividend yield at these prices is very attractive and, in view of TGP’s strong fundamentals, also relatively safe. The shares are not very liquid, having average daily traded volume of around 25,000 shares. The total number of shares outstanding is 6,800 000. The low liquidity is partially given by the fact that a non-negligible portion of the shares are held by various index funds and ETFs. This also has something to do with the investment opportunity in them that opened up last March.

When most of the large economies were locked down and markets started to fall, a number of ETFs faced cash withdrawals. By their very nature, ETFs hold almost no cash. That means when investors withdraw money, the ETFs have to sell assets in order to obtain cash to buy back their own shares and pay out the departing investors. There is nothing unusual about this. It is a mechanism in essentially all open funds, including ETFs.

A problem arises whenever there occur too many withdrawals in comparison to the liquidity of those assets held by an ETF. ETFs themselves ensure daily and practically unlimited liquidity to their investors. Their portfolios, however, are often much less liquid. ETFs focused on preferred shares had a big liquidity problem last spring. If a fund holds for instance even just 500,000 TGP-B shares and has to sell them quickly, then an average daily liquidity of 25,000 is a problem.

ETFs cannot wait to sell, because at the end of the day they have to have cash to pay out their investors who are leaving. That means they must sell at practically any prices whether they like it or not. So they sell under pressure, against their will, and regardless of price. If you look at the development of TGP-B share trading in spring 2020, you will get a nice picture of how urgent the situation really was. In mid-February, the shares were still trading above their nominal value of USD 25. Then forced sell-offs on the part of ETFs hit the stock. The price began to fall sharply and traded volumes leapt upward. The entire process culminated on 18 March when the price dipped below USD 12 during the day and the traded volume was 309,000 shares.

At the price of USD 12, the dividend yield per share was 17.7%. We know TGP quite well and, considering the long duration and type of their contracts, we were nearly certain that they would not be much affected by recession in 2020. (In the end, this proved to be a correct assumption because 2020 was a record year for TGP in all respects.)

We were watching the price slump in real time, and we almost did not want to believe that somebody would be willing to sell us these shares for such low prices. In reality, however, most of the final shareholders of those funds that were dumping the TGP-B shares into the market had no clue what was happening to their money. We saw buying those shares as the only possible reaction for us. We assumed that the forced sell-offs would end sooner or later, the market would return to normal, and sooner or later the price of TGP’s preference shares would go back to its usual level around USD 25. In addition to all this, there was the big quarterly dividend and a price of money that had fallen nearly to zero. This is exactly what happened. See the first graph. 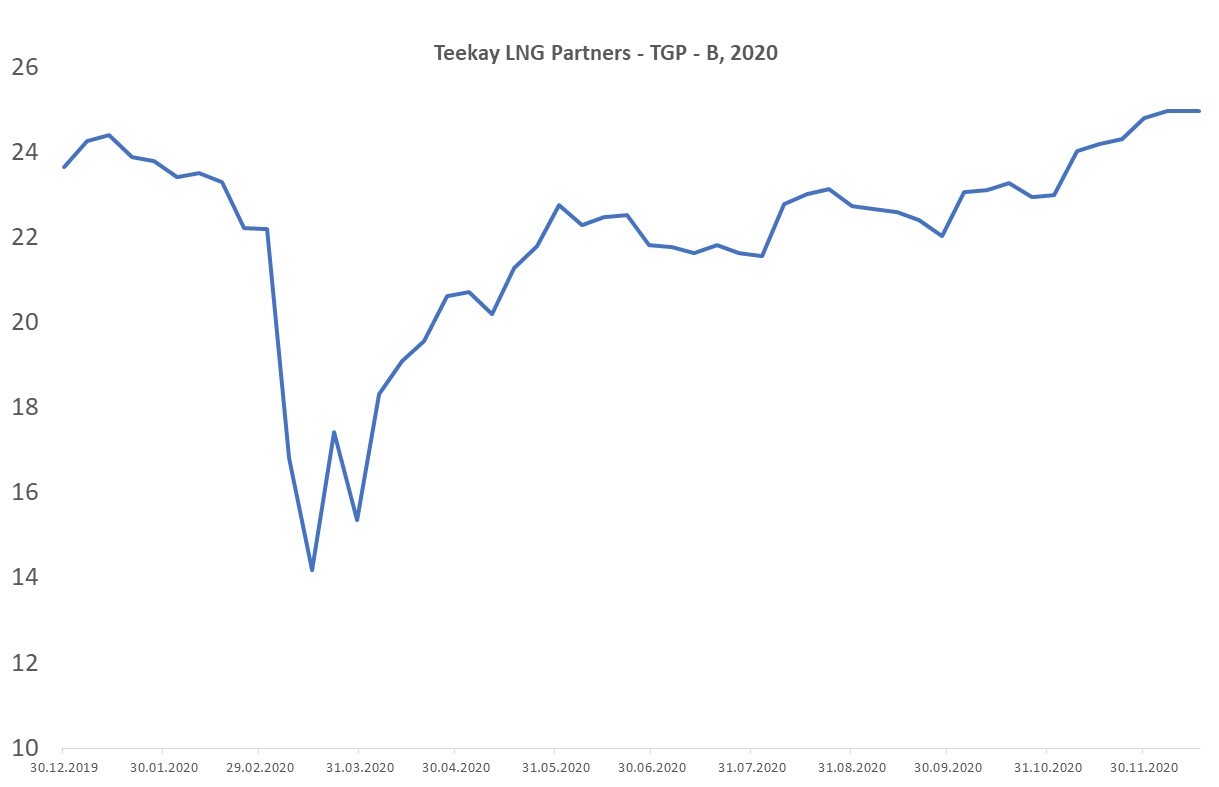 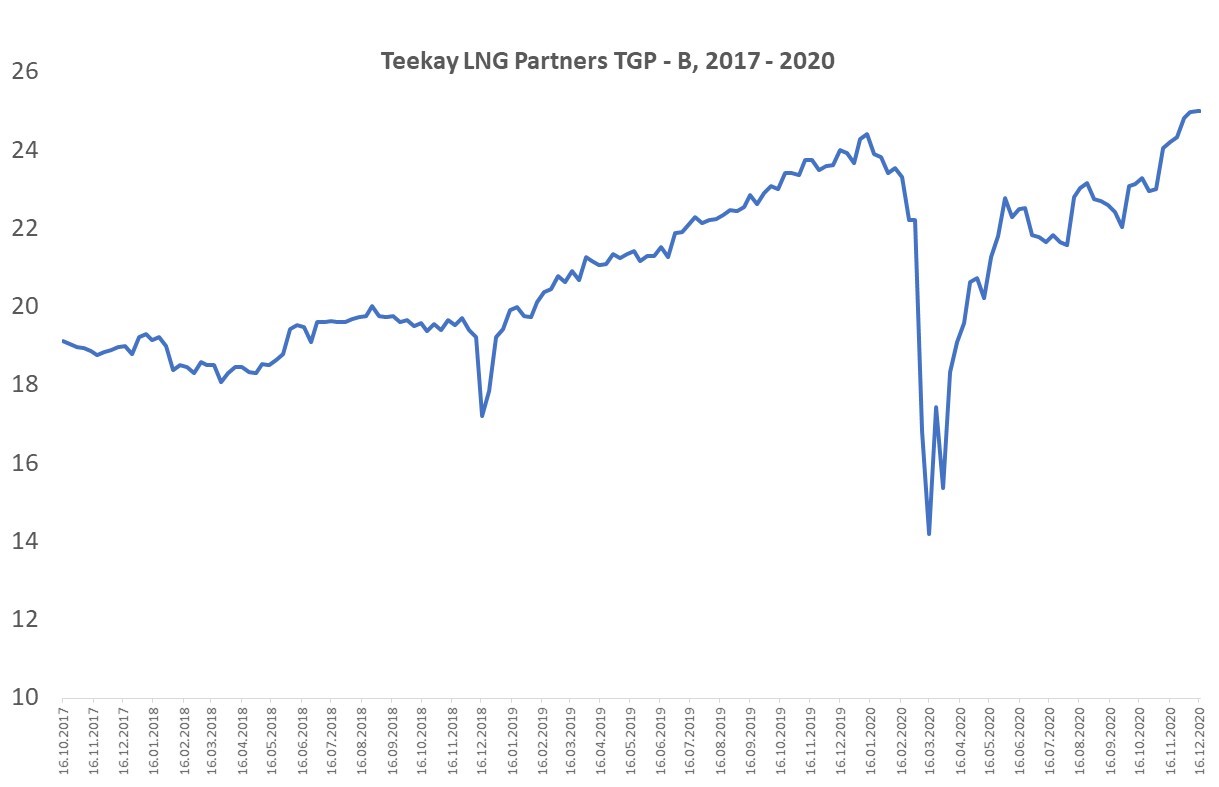 In the second graph, we can see that a similar but smaller such episode had occurred in these shares at the end of 2018. We expect that similar situations will continue to appear in an ever-expanding spectrum of securities. The overwhelming dominance of passive investing causes the discrepancy between the liquidity of ETFs themselves and their underlying assets to be increasing and gradually is affecting a greater part of the market. When money flows into these passive funds, they must buy – automatically and regardless of prices – as prescribed by their benchmarks. When money flows out, they must sell – again, automatically and regardless of prices.

We have been warning already for quite some time that in cases when investors start to withdraw money from passive funds (and this is always only a question of time) it may easily happen that passive funds will have nobody to sell their assets to and so the prices must decline sharply in order to bring supply and demand into balance. This is not an attempt to frighten anybody. We are just trying to point out that the current character of the market and placement of assets has changed its dynamics substantially. This small case study of our trade in TGP preferred shares shows that these things have already been happening and it is possible to use them to one’s advantage. Invest carefully!